When it comes to licensing your Oracle database environment, there are two different metrics that you can choose from, NUP or CPU. The metric that you use to license your environment will be defined by how the system is deployed in terms of the hardware specification of that environment, how the users access that system and often the number of users that they will be accessing.

The first and most simple metric is the named user plus (NUP), and this is based on a human user or a non-human operated device that has the ability to connect and manipulate data in the Oracle database. It’s based on a total user count whereby you can quantify the user population; you don't need to physically keep a register of the username so the title ‘named user’ is a little bit of a misnomer and there is flexibility should user accounts change. There is no concept of license sharing or concurrent license usage – that was a model Oracle had around 20 years ago now. NUP is based on the total number of users.

A lot of Oracle products have minimum user purchases, in terms of the values of licenses that you must buy, and these are often based on the hardware that the system is to be deployed on.

For example, if you have a production system and a training environment, you would calculate the minimums over that total piece of hardware, and that initial user who has that license is then covered for both environments.

The other license type is the processor or CPU metric. This license type is for where you have a web-based application, where you have a large number of users that you can't quantify, or there's a user population that you just can't pin down for the purposes of calculating a license count. It's based on an unlimited user license and it's calculated based on the specification of the hardware it is to be deployed on. 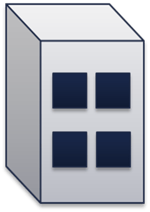 In a very simplified example, you can see that the server above has four CPUs so that would equate to a four CPU license. In practice it's a little more complicated as many of the Oracle products are licensed at the core level, but that gives you an overview of the license model.

Standard Edition database licensing is simply based on the physical CPU’s in the server. You buy 1 CPU license for every CPU, however, be aware SE2 can only be deployed on servers with a maximum capacity of 2 CPU sockets.

Enterprise Edition database is different in that you license at the core level. You have to aggregate the total number of cores in the hardware, then apply what is known as the “core factor” to calculate the number of licensable cores!

A general rule of thumb with the CPU metric is that the more CPUs and cores that you add, the more Oracle licenses you to require and consequently the cost increases in overall license and support costs. What we tend to find is that environments are architected by the technical team, and at the point of qualification for Oracle licensing we tend to find that hardware specs are amended or scaled back because of the high exposure to those license costs by adding more CPUs and cores! Particularly as many multi-core CPU’s now how 10 or 12 cores as standard!

It’s important to note that various database editions have their own restrictions and specific licensing policies that you need to be aware of when you architect an Oracle environment or buy a piece of hardware to deploy Oracle on. Speak to a DSP-Explorer Oracle Licensing specialist to understand those restrictions.

When comparing the cost options of an NUP license against a CPU license there's roughly a breakeven point where one CPU is equivalent to 50 named user licenses, so again depending on the number of named users and the spec of the hardware you’re deploying on, there will be a point where one license metric is more cost-effective than the other.

At DSP-Explorer we have extensive experience in helping customers with commercial modelling for their Oracle license environment so should you have a specific scenario then please don't hesitate to get in touch, we can use our experience to offer advice on the configuration that will potentially save you money and more importantly leave you in a compliant position. Keep an eye on our social media pages for our latest Oracle Licensing Webinar or catch up with our latest Oracle Licensing On-Demand Webinar.